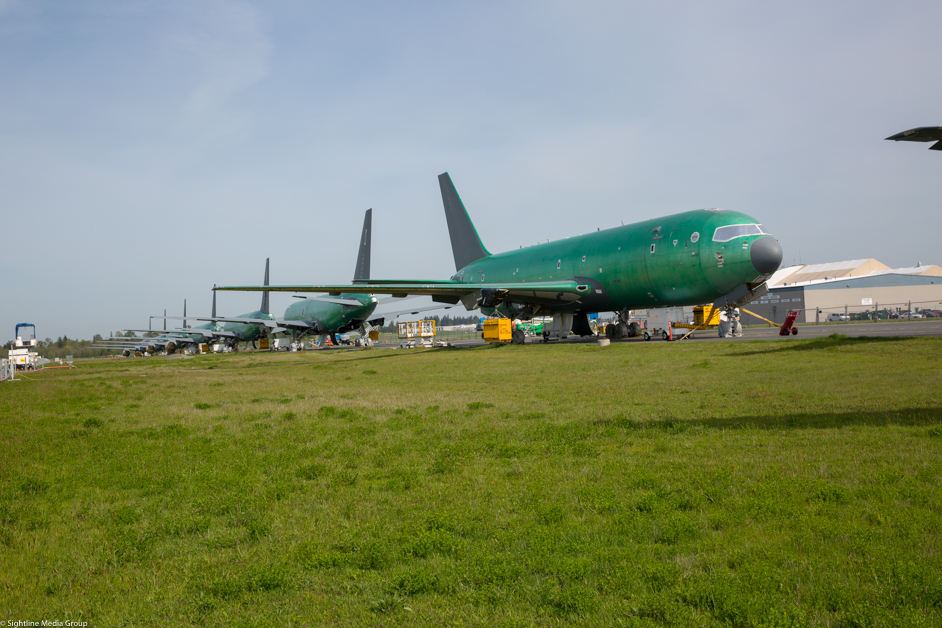 WASHINGTON — After more than a year of delays, the Air Force finally took hold of its first KC-46 tanker on Jan. 10, but it will take several years for the service and manufacturer Boeing to reconcile major technical problems, and the company will not be receiving the full amount of money due upon delivery.

The agreement, finalized after months of sometimes public and contentious discussions, allows McConnell Air Force Base in Kansas to receive the KC-46 as early as this month, with more set to follow, said Air Force spokeswoman Capt. Hope Cronin. However, the new tankers will arrive with several outstanding category 1 deficiencies, the term used by the military to describe the most serious level of technical problems.

Here's when the Air Force will get its first KC-46

That may sound like a blow to the Air Force, whose leaders had previously implied that all category 1 deficiencies would need to be fixed before tankers began getting accepted.

However, service leaders believe the Air Force retains significant financial leverage even as the KC-46 delivers, and they see it as vital that Air Mobility Command be able to begin training pilots and boom operators to use it even as technical problems are being corrected.

Remember that list of KC-46 problems? Here’s how they’re getting fixed.

“Despite all the flaws, there is operational utility of the system,” an Air Force official told Defense News. “KC-46 has a lot of systems that our legacy tankers don’t that in a contested fight you might want. It has improved situational awareness and battle management and protection.”

Perhaps more importantly, the Air Force holds a significant trump card in its hand. According to the terms of its fixed-price contract with Boeing, the service can withhold up to $28 million per aircraft upon delivery — and the Air Force official said the service intends to keep back that amount until it sees a good faith effort by Boeing to fix deficiencies.

That means Boeing could miss out on $1.5 billion if the maximum withholding is applied to all 52 aircraft on contract.

“That is not something that legitimately can be contested by Boeing. That is purely a government decision until the airplane is brought up to specification,” the official said.

Before the Air Force would accept the first KC-46, Boeing and the service first had to come to terms on the aircraft’s Remote Vision System, the biggest technical hurdle that had bogged down talks between the parties.

In short, Boeing has agreed to embark on a redesign effort for the Rockwell Collins-designed RVS that will involve both hardware and software changes. The Air Force now believes it will take three to four years to develop a fully functioning remote vision system, and Boeing has agreed to fix it at its own expense, Cronin said.

However, the Air Force test communities have complained that certain lighting conditions cause the imagery provided to the boom operator to be misleading, contributing to cases where the boomer accidentally scrapes the skin of the receiver aircraft. For aircraft with low observable coatings, such mistakes could result in the loss of stealth and a hefty repair bill.

Boeing has previously maintained that it could update its software to fix RVS problems, while the service was more reluctant to put its faith in that proposed solution.

Boeing pushes back on its bad reputation on KC-46 tanker

To better understand the RVS, the Air Force formed a team that included personnel from Boeing, Air Mobility Command, the Air Force’s acquisition wing and the Human Performance Wing at Wright-Patterson Air Force Base, which studied how the imagery from the RVS was being perceived and internalized by the boom operators.

For example, “there is a slight difference between the motion viewed in the RVS versus what is actually occurring in the physical world. All of those things can create a depth compression and curvature effect” where boom operators might overcorrect their movement based on what they are seeing onscreen, an Air Force official explained.

Once it was able to understand how the RVS distorted imagery under certain conditions, the Air Force was able to more firmly articulate the requirements Boeing must meet in order to accept the RVS, but those parameters will surely entail hardware changes — potentially very extensive ones.

However, the Air Force also had to make key concessions. Namely, it will have to pay for another fix itself, using taxpayer money.

During tests, the Air Force found that certain aircraft — most often, the A-10 Warthog — had trouble generating the necessary thrust to push into the boom for refueling.

Boeing presented a boom design to the government at Milestone C that set the boom resistance to the international standard of about 1,400 pounds, which the government accepted, the Air Force official said. The problem is that to refuel the A-10, the boom needs to have a much lower threshold of thrust resistance, around 650 pounds.

Because the Air Force is asking for a change in requirements, it has agreed to fund the additional work — though it is still working out exactly how much it will cost for the redesign work and retrofits, the official said. That redesign and manufacturing process will probably take about two years.

A (recent) history of KC-46 deficiencies

The delivery of the first KC-46 is a huge milestone for Boeing, which won a $4.9 billion fixed-price contract for the tanker program in 2011 after a protracted and controversial battle against Airbus.

The company was due to deliver the first 18 KC-46s to the Air Force in August 2017, allowing the service to declare the aircraft operational. But numerous technical issues were found that have delayed that milestone and driven up the price of the program.

After months of discussions with the Air Force, the service and Boeing came to an agreement in late 2018 that stipulated the way forward on KC-46, including a path to close deficiencies and a plan for the first KC-46 delivery.

The compromise would allow Boeing to get the tanker off its books by the end of the year — something the company has held that it could accomplish after missing the deadline several times since 2017 — but, first, Defense Secretary Jim Mattis would have to approve the approach. When he resigned in late December, and then was forced by President Donald Trump to leave his role by the end of the year, momentum on the tanker delivery stalled.

Boeing has been forced to pay out more than $3 billion out of the company’s own accounts as a result of cost overruns.

However, some of the more serious technical problems appear to be on the mend.

The Air Force downgraded two category-1 deficiencies to category-2 status after a November 7 meeting of the deficiency review board. A category-2 deficiency is a serious technical issue for which there is a workaround in place.

The other deficiency occurred when the centerline drogue system experiences an increase in tension and disconnects from a receiver aircraft without being commanded to by the boom operator. The issue was observed during tests of multiple KC-46 tankers with two different F/A-18 Hornets acting as receivers.

To fix that problem, Boeing proved out a software fix that was then implemented throughout the existing KC-46 inventory, the company said in a statement.