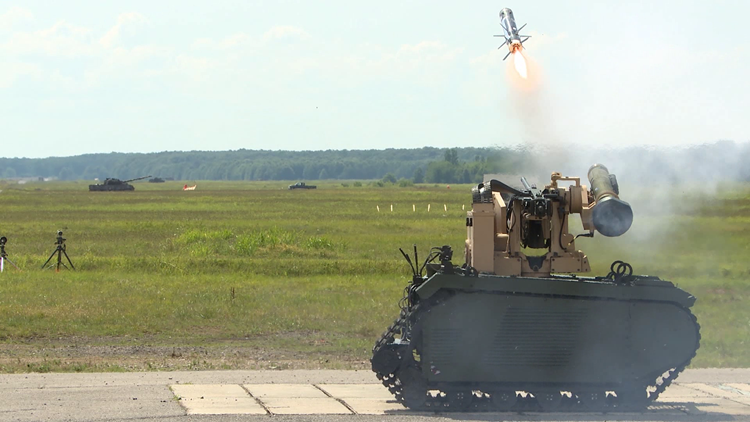 The demonstration validated the capability in mid-June, Brad Fibbs, of Raytheon, told Defense News in an interview at DSEI, a large European-focused defense conference and exposition.

Raytheon began putting together the team roughly a year ago, selecting a Milrem robotic ground vehicle that stood out at a Paris-based defense conference for its ability to accept a wide variety of payloads and its innovative, clean design, Fibbs said.

And the battle tested-Kongsberg remote launcher — Protector — was selected as well.

The demonstration was targeted for the U.S. Army’s Tank-Automotive and Armaments Command (TACOM)’s efforts to examine robotics as a force multiplier, Fibbs said, “so you don’t have to burden the dismounted soldier too much, carry supplies, carry wounded, carry heavy effectors to the fight, so we knew that that was something they were looking for.”

The U.S. Army is in the particularly nascent stages of determining when and how it will use armed ground robots on the battlefield and so a system like Raytheon and Lockheed’s will show the service more regarding how these systems might be deployed and what requirements might be needed to shape future programs.

And it uses a weapon system already in the U.S. Army inventory.

The system used a secure RF link to the robot during the demonstration and transmitted and received video from the robot and the Kongsberg fire control, Fibbs said.

In the case of the system, a man is always in the loop as the robot does not use autonomous capability but remotely operated controls.

U.S. Army Futures Command is also looking for innovative ways to deploy effectors forward, especially as the U.S. continues to focus on Russian deterrence in the European theater and fielding capabilities that overmatch Russian capability.

The Russians have used Syria as a testing ground for capability including armed ground robots.

Raytheon is planning on evolving its efforts to examine how to increase dismounted infantry survivability, Fibbs said, “because you have a robotic vehicle you can carry a heavier sensor that has increased detect, recognize and identification (DRI) capabilities.”