For Shanahan, looks like a rocky road to defense secretary 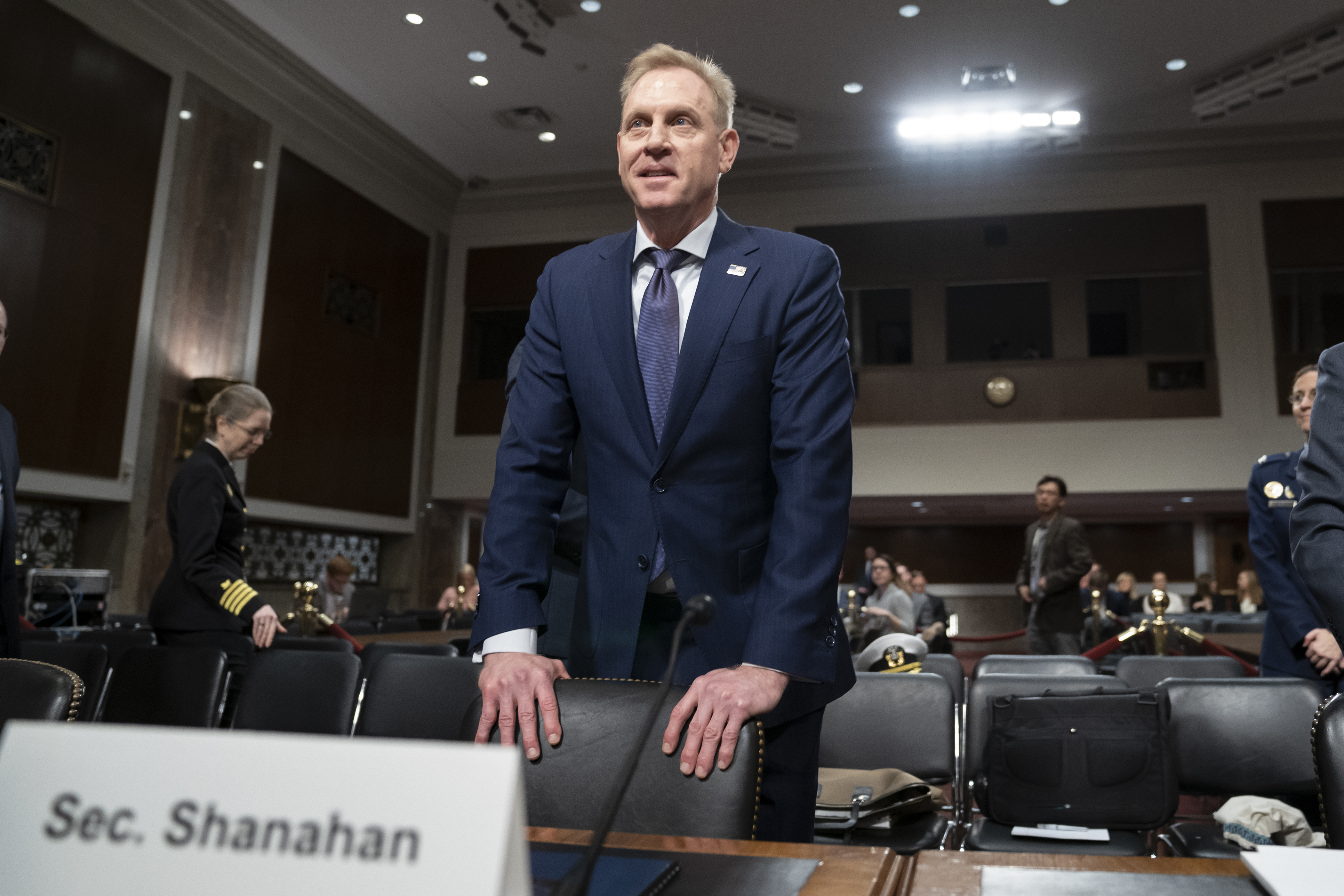 WASHINGTON — Senate Republicans almost certainly have the votes to confirm Patrick Shanahan as the next Secretary of Defense. But that doesn’t mean the process will be smooth and simple.

Key Democrats are signaling that Shanahan, the acting defense secretary who was informally nominated for the permanent role last week, will face tough questioning and possibly significant resistance in what has already been a bumpy path to him taking over the military’s top civilian role.

Democrats on the Senate Armed Services Committee are already expressing wariness over the former Boeing exec’s industry ties, his relative inexperience on the world stage and whether he can stand up to Trump, particularly after his acquiescence to Trump’s pursuit of Pentagon funds for a border wall.

Shanahan could also face questions on the administration’s saber rattling toward Iran, its transgender troop ban and the DoD’s efforts to weaken cleanup standards for chemicals in water near many bases.

And Shanahan’s confirmation hearing will include interrogation from at least two Democratic presidential hopefuls — Sens. Kirsten Gillibrand of New York and Elizabeth Warren of Massachusetts — and likely additional concerns on the Senate floor from four others: Sens. Michael Bennett, of Colorado; Cory Booker of New Jersey; Kamala Harris of California; Amy Klobuchar, of Minnesota, and Bernie Sanders, I-Vt.

For each, the nomination of a new defense secretary provides a chance to highlight their own campaign’s defense policies, and their concerns with those of President Donald Trump.

It’s also a chance to remind the public of who Shanahan is replacing: former Defense Secretary Jim Mattis, a retired Marine four-star, who stepped down over Trump’s plans to withdraw U.S. troops from Syria. Mattis was perhaps the most respected foreign policy official in Trump’s administration and had a reputation for moderating the president’s hardline policies.

“We had a secretary, in Secretary Mattis, who the committee had complete confidence in. He had deep experience and wisdom about these topics, and he was going to tell the president exactly what he thought,” said Sen. Tim Kaine, D-Va., and ranking member of the SASC subpanel on readiness.

“We want to gauge [whether Shanahan] has the kind of backbone where he will give his advice regardless of what the president wants to hear.”

Senate Armed Services Committee Chairman Jim Inhofe, R-Okla., and an ally of Trump, said his intent is to schedule a hearing as soon as he receives Shanahan’s required paperwork, and he wants a quick confirmation. But he also expects the process to be partisan, a referendum on the president, and rough going.

“It will be, because Democrats don’t like Republicans,” Inhofe said. “The opposition will be 90 or 95 percent partisan opposition against this president.”

Inhofe brushed off concerns about the former Boeing exec’s industry ties and said the top priority for Shanahan — who sometimes speaks haltingly in high-pressure Capitol Hill appearances — is to show poise in the face of tough questioning. (Inhofe has embraced Shanahan after offering tepid support in the past.)

Shanahan’s public performance before the Inhofe-chaired SASC has improved over time, but it was “lacking” in his first appearance. “I think most people would say he was not as determined, he was hesitating and not showing a lot of leadership, but that turned around in the next hearing, so whoever talked to him said the right thing,” Inhofe said.

What’s the state of play for a ‘Defense Secretary Shanahan’?

Any nominee for defense secretary entering in the middle of a president’s term is expected to answer for the president’s decisions, as were Obama administration defense secretaries Ash Carter and Chuck Hagel. (Hagel’s bitter confirmation process was subject to a damning op-ed from Inhofe and a filibuster before Hagel was confirmed, 58-41.)

“When it’s a new administration, there’s a certain presumption that you give the president an opportunity to put his team together, but that quickly evaporates in any administration,” Reed said.

Reed said the job requires Shanahan to be both a master of geopolitics and strategy and that he has access to the president. Though Shanahan was confirmed by the Senate 92-7 as the deputy defense secretary in 2017, Reed and other Democrats pointed out that this job has different qualifications.

“I don’t know what the vote’s going to be, but [it’s] two different jobs,” Reed said. “He came in to be a manager of systems, which he’d done at Boeing for years. [As defense secretary], you’re not just thinking about management and acquisition: What are the strategic and geopolitical implications of this decision? What are the priorities of DoD that we have to change?”

Some Democrats on the committee have signaled they are predisposed against Shanahan.

“Shanahan may be the least-qualified nominee for secretary of Defense that the Senate Armed Services Committee has considered during my time in the Senate,” Sen. Richard Blumenthal, of Connecticut, said in a statement after Trump tapped Shanahan. Blumenthal joined the Senate in 2011.

“I have been unimpressed by the lackluster testimony Shanahan provided to the Senate Armed Services Committee during recent hearings, and deeply concerned about his three decades in the corporate culture, which have undoubtedly shaped his limited perspective on national security issues," he added.

Some Republicans on the committee have a much more positive perspective on Shanahan. That’s likely to be reflected at Shanahan’s hearing, too.

“I’ve worked with him on a lot of issues, he’s always gotten me information, he’s always been open, we’ve had good conversations,” said Sen. Deb Fischer, R-Neb., and the chair of the SASC Strategic Forces Subcommittee. Fischer was initially skeptical of the administration’s pursuit of a space force, but affirmed Monday that her position and the administration’s proposals have evolved toward one another.

“I would agree with the [SASC] chairman that we should be able to move forward fairly quickly once we get the paperwork," she said of Shanahan. "It’s not like he’s an unknown quantity, for heaven’s sakes. He’s been the acting and the deputy, so it’s not like we would want to prolong this. I would think all of us would want to get someone in there permanently.”