Here are the four prizes Textron Systems is watching in 2019 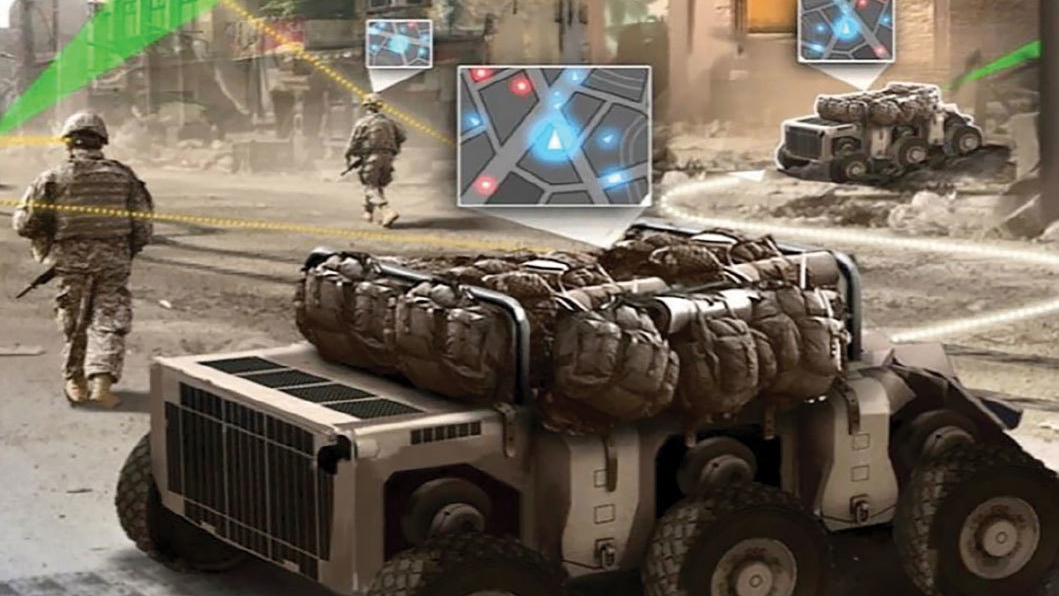 WASHINGTON — Textron Systems is focusing on the U.S. Army this year, with its chief executive naming four unmanned and small arms programs with the service as the company’s “need to win” items in 2019.

With its recent acquisition of Howe & Howe Technologies, Textron finds itself a player in the Army’s Squad Mobility Equipment Transport competition.

The Army wants to buy a robotic equipment carrier that troops can load with their gear, and Howe & Howe’s tracked RS2-H1 robot is competing alongside three other companies for the contract.

“We believe that program will progress this year, and we look forward to moving that to low-rate production,” Atherton said.

The other competitors undergoing tests with the Army and Marine Corps are the Polaris MRZR X, a four-wheeled vehicle based on the Polaris MRZR currently in service with the Marines; the General Dynamics four-wheel drive Multi-Utility Tactical Transport; and the six-wheeled HDT Global Hunter WOLF, or Wheeled Offload Logistics Follower, Army Times reported last year.

“They asked us to deliver eight vehicles and then just give them to the soldiers and let the soldiers do what they will with them and basically try to break them,” Atherton said.

The vehicles have now come back to Textron in good working condition, which Atherton said is a “testament to the robustness of that capability.”

After a year of tests, the Army will make a decision on the way forward with the program, which could involve a downselect to a single SMET provider, Army Times has reported.

As the Army looks to replace the Bradley Fighting Vehicle with what the service is calling the Next Generation Combat Vehicle, it is also hoping to develop an unmanned tank that can accompany it into battle as a robotic “wingman.”

“We believe that the Ripsaw is tailor-made for that,” she said, referring to the light unmanned tank developed by Howe & Howe. “So this year we will be focused on responding to the [requests for proposals] that come out for the prototypes.”

Ripsaw’s appearance on the show “Jay Leno’s Garage” attracted Atherton’s attention to Howe & Howe and laid the foundation for the company’s eventual acquisition. The robotic tank has been featured in numerous TV and movie spots, including the film “Mad Max: Fury Road.” The Army previously tested it at Picatinny Arsenal in New Jersey.

Atherton said Textron will make investments to improve the survivability of Ripsaw, as well as add “other innovations.”

Brig. Gen. David Lesperance, who is leading the NGCV Cross-Functional Team, said in March that both NGCV and robot combat vehicle prototypes will be ready for soldier evaluations by 2020, with follow-on prototypes ready by 2022 and 2024.

As the Army looks to replace its RQ-7 Shadow drones, it’s testing a number of small, nondevelopmental unmanned aerial systems with the hopes of buying something off the shelf.

As part of that effort, Textron was chosen to demonstrate Aerosonde HQ at Dugway Proving Ground, Utah, last month, Atherton said. Aerosonde HQ is a version of Textron’s small Aerosonde UAS and includes a kit that allows it to take off and land vertically.

“Our team widely exceeded the threshold requirements,” she said. “So we’re very proud of what we were able to do: very rapidly integrate those techniques and procedures and technologies into the Aerosonde to be able to provide that to the Army for the future tactical UAS.”

Reducing the weight of small arms is a major goal of the program, and Textron previously developed case-telescoped weapons it claims are lighter in weight and more lethal than current weaponry.

“We believe we are the leaders in the case-telescoped prototypes for the Army’s next-generation squad weapon with our lightweight small arms technologies,” Atherton said.

The company showcased a 5.56mm light machine gun variant and a 6.5mm caseless service rifle variant at the Association of the U.S. Army’s annual meeting in 2017, Army Times reported.

The service has awarded contracts to Textron; FN America, LLC; General Dynamics; PCP Tactical; and Sig Sauer to build prototypes of a Next Generation Squad Automatic Rifle, or NGSAR. The prototypes are due to be delivered this year. That weapon would replace the M249 Squad Automatic Weapon, which fires 5.56mm rounds.

The program also seeks to find a replacement for the M4, which it calls the Next Generation Squad Weapon Rifle, or NGSW-Rifle. Both NGSW-Rifle and NGSAR will fire 6.8mm rounds.