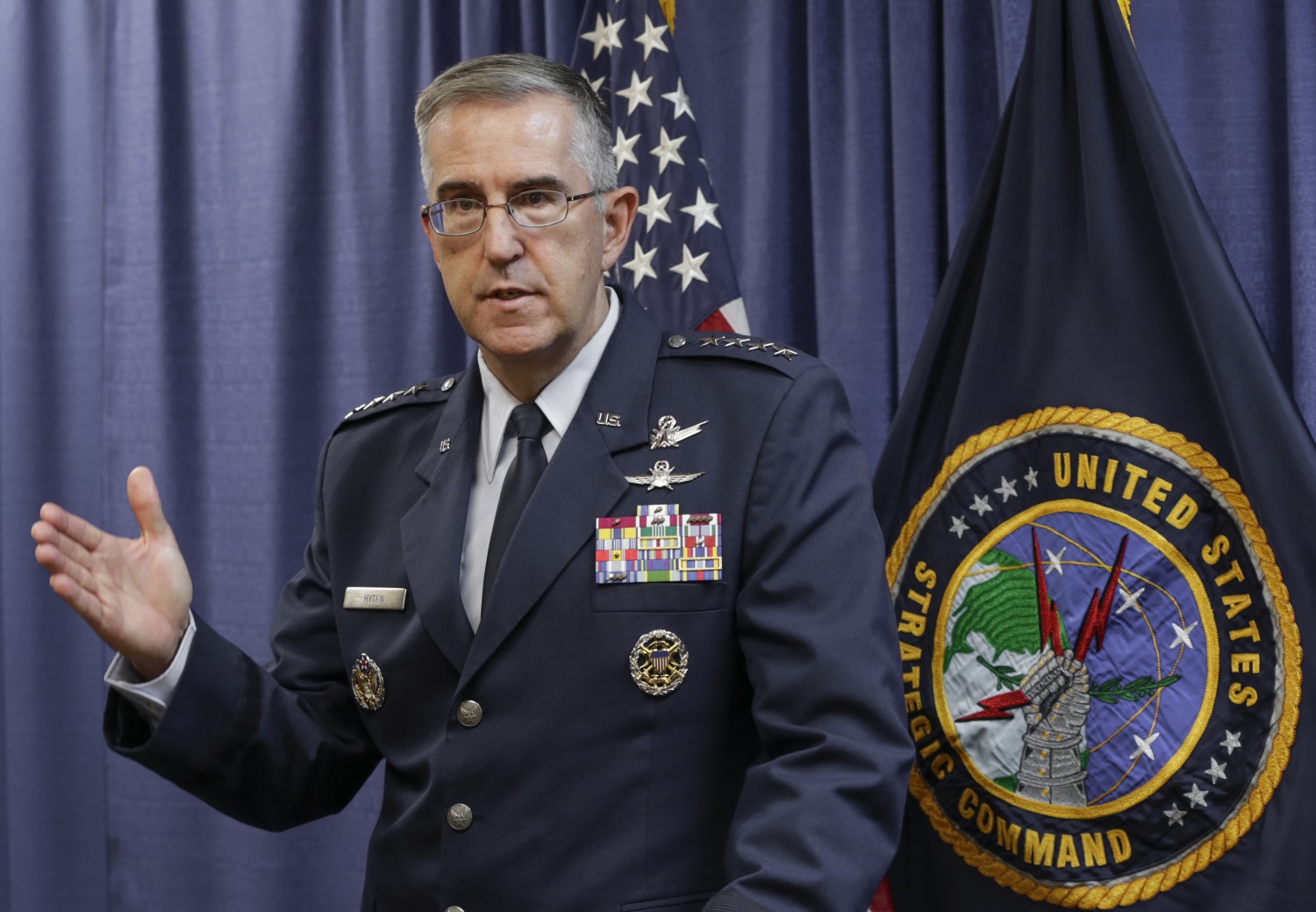 WASHINGTON ― Congress should be given the opportunity to hear directly from the woman who accused the nominee for vice chairman of the Joint Chiefs of sexual misconduct, a key senator told reporters Thursday, as other legislators suggested a delay in the nomination process is needed.

“Any time we have these allegations, I think the victim deserves her time to tell her story.”

Duckworth’s comments came after the Washington Post reported that the accuser — an Army colonel with 28 years of service — was willing to testify under oath to Congress about her accusations.

Duckworth said the accuser, who she found to be, “very believable,” is a constituent and reached out to her office. The woman is a an Army colonel who served in Iraq and Afghanistan and was subsequently relieved of her duties while serving on Hyten’s staff, according to the Washington Post.

The officer told The Associated Press that Hyten subjected her to a series of unwanted sexual advances by kissing, hugging and rubbing up against her in 2017 while she was one of his aides. She said that he tried to derail her military career after she rebuffed him.

After she came forward in April, Air Force investigators found insufficient evidence to bring criminal charges against Hyten or to recommend administrative actions.

Senate Armed Services Committee Chairman Jim Inhofe, R-Okla., said Thursday he was satisfied with the thoroughness of the probe and that he did not think it was necessary that he hear directly from Hyten’s accuser.

Inhofe, an ally of the president, then suggested the new scrutiny was in part politically motivated.

“Let’s keep in mind that people, for clearly partisan reasons, people want to inflict damage on Donald Trump as well as anybody else on the Republican side,” he said. “There’s nothing new to that, and motivation is there ... It’s driving a lot of it.”

After nearly all SASC members were briefed Wednesday by a Pentagon official about the investigation, several said they were left with questions. Inhofe, however, was satisfied but open to input from panel members about how to proceed.

“We collectively felt ... we needed to investigate to evaluate the accusations; we did that,” Inhofe said, lauding Air Force investigators. “I am satisfied with how thorough they were during this process, and we haven’t had our follow up meeting to see if anyone’s going to request further activity.”

Asked if Hyten’s confirmation would be delayed, Inhofe―who has pressed the White House for months to resolve the many vacancies in Pentagon leadership―said, “I hope not ... We need to get things done.”

SASC members were granted access to the Air Force’s investigative report, and several declined to comment to reporters Thursday because they were still evaluating its contents. Some senators on both sides of the aisle said Thursday that they needed more time either to read it or gather answers to their questions.

“We’re still in the process of going through it,” said the panel’s top Democrat, Sen. Jack Reed, of Rhode Island.

Likewise Sen. Richard Blumenthal called the allegations, “serious and concerning,” and expressed openness to a delay in Hyten’s confirmation. “She needs to be heard with respect,” Blumenthal, , D-Conn., said of Hyten’s accuser.

“There certainly needs to be full, fair consideration of these serious, concerning allegations, and the timing will depend on how we can resolve the outstanding questions and talk among ourselves about a way forward.”

Aside from the allegations themselves, Duckworth questioned whether DoD provided Hyten with preferential treatment, both because he was not suspended during the investigation and because the probe was conducted by Gen. Mike Holmes, the four-star chief of Air Combat Command, who is technically junior to Hyten.

“There are a couple of things where Gen. Hyten has received treatment that is not in keeping with how DoD has handled this for other officers, and I didn’t have that answered,” Duckworth said.

US nuclear general worries over Russia’s weapons outside New START

SASC Strategic Forces Committee Chairwoman Deb Fischer, R-Neb., represents the Strategic Command’s home state and her sub-panel’s jurisdiction covers the command as well. On Thursday, she said during a hallway interview that she had questions, but did not elaborate.

“It’s important all the members review the report that’s there, we have access that, to be able to continue to ask questions,” Fischer said. “But it’s important to have the facts and not go in with any prejudgements.”

Sen. Joe Manchin, D-W.Va., said he wanted to ensure both that Hyten was treated fairly and, “that we investigate to the deepest depths that we can go, to make sure we know exactly what happened.”

“There were a couple of loose issues that I didn’t have comfort with that I’m going to meet with them privately to find out their intent or what they find out,” Manchin said of investigators. “For me personally, I have to get a couple of clarifications before I feel comfortable voting [on Hyten’s confirmation].”

The Associated Press contributed to this report.