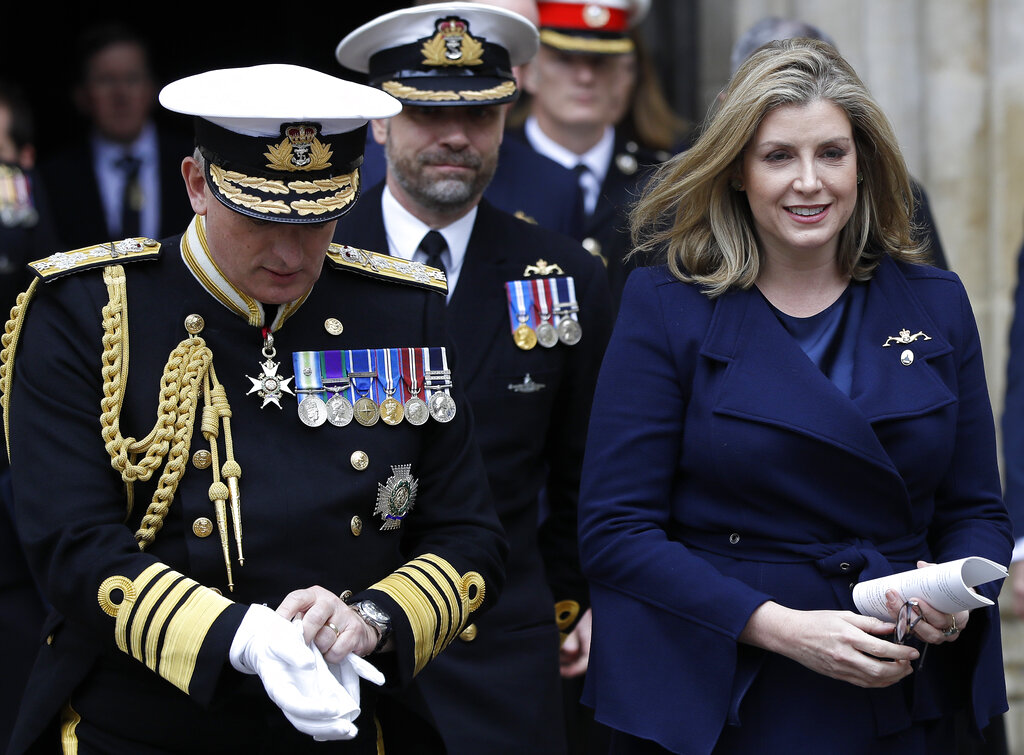 LONDON — Barely two weeks into her new job as British defense secretary, Penny Mordaunt has used her maiden speech to warn the Treasury that she will be fighting to secure the “critical investment” the military needs to meet the emerging challenges from Russia, China and elsewhere.

Promising to not be shy about asking for more money, Mordaunt did add that the ask must be linked to the job the armed forces need to accomplish.

“The only way to get credibility with the Treasury is to be focused on our task. What is it we are asking the Royal Navy and wider defense to do?

If the [role of the] Royal Navy and wider defense is to deliver on the ambitions of our country, then we must tackle the funding and the political behaviors which constantly undermine it,” she said.

Consultant Alex Ashbourne Walmsley of ASC consultancy in London said Mordaunt was realistic in saying the Treasury may not agree with her message.

“She has a clear view of what she wants the armed forces to be but I think she is wise enough to know that may not mean an immediate influx of funds, said Ashbourne Walmsley.

The defense secretary declined to put a figure on the size of the increase the Ministry of Defence would be seeking in the upcoming spending review, due to apportion budgets for all government departments for the next three years.

Part of the problem in the past was that people have been distracted by the debate around whether the 2 percent of GDP guideline set by NATO was a floor or a ceiling for national defense spending, she said.

“It’s not the real issue," he said. “The message she has to get over to the Treasury and the Cabinet Office is what defense needs the money for," regardless of NATO aspirations.

Mordaunt’s remarks about spending come just two days after Foreign Secretary Jeremy Hunt used a major speech in London to call for a “decisive” defense budget boost over the next decade to maintain Britain’s position as a leading global military power.

Neither Hunt nor Mordaunt offered any suggestions as to where the cash for a defense spending hike might come from. The MoD is trying to close the current hole in defense spending over the next 10 years with efficiencies and cuts and delays to programs and capabilities.

Hunt’s speech was seen as something of a personal manifesto as he and others prepare for a leadership fight once Prime Minister Theresa May is finally pushed out of office over her chaotic efforts to negotiate a withdrawal deal for the European Union.

The new defense secretary is said to have similar ambitions too and her confident, well received, RUSI speech smacked slightly of a leadership campaign, said some delegates at the conference.

Mordaunt, Britain’s first female defense secretary, is a navy reservist and was ex-armed forces minister before becoming secretary of state at the Department for International Development.

Mordaunt took up her new role May 1 after her predecessor, Gavin Williamson, was fired after being accused by the prime minister of leaking sensitive information to the media relating to Chinese communications company Huawei.

Not too many people had much good to say about Williamson after his departure. However, most did praise him for persistent efforts to winkle more cash out of a reluctant chancellor, ex-defense secretary Philip Hammond.