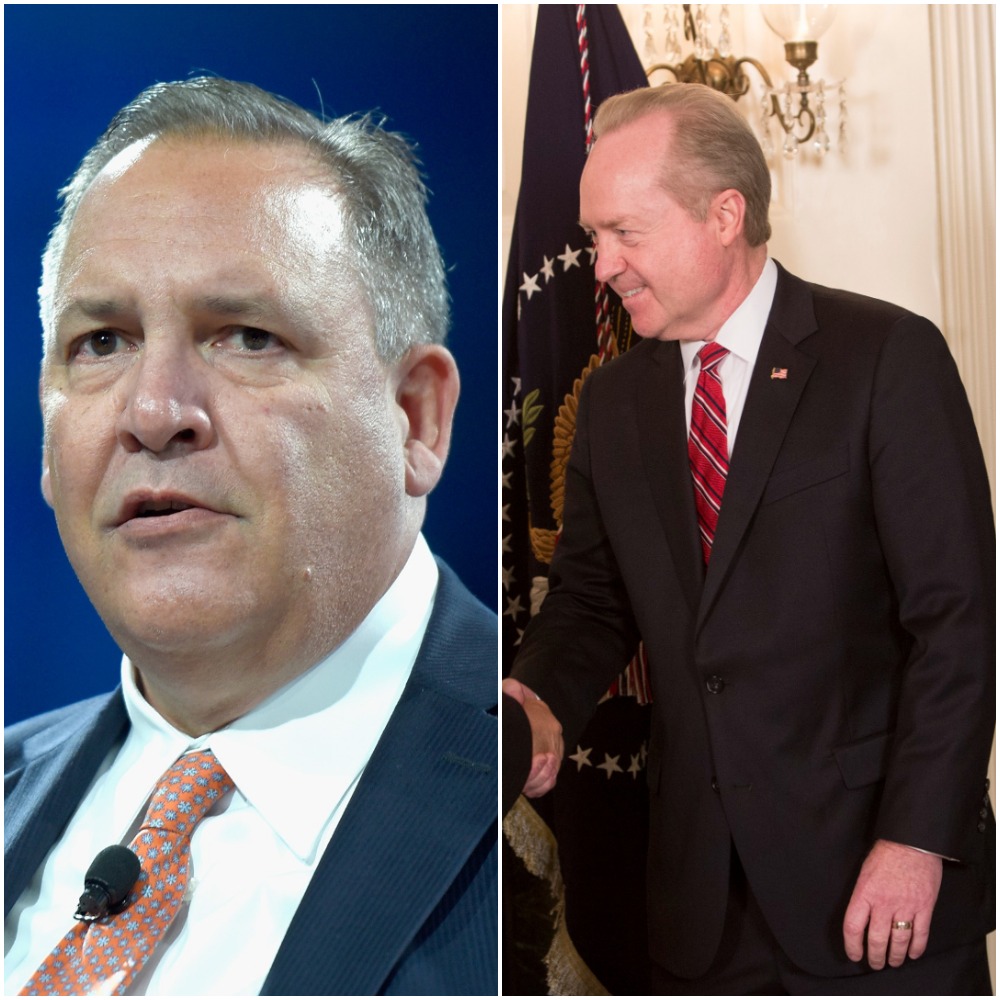 WASHINGTON — When Raytheon and United Technologies Corporation made a surprise announcement Sunday that they would be merging together, it sent shockwaves through the defense and aviation sectors. The combined firm will likely become the second largest player in the defense world, with major stake in the commercial aviation realm as well.

Speaking to Defense News Monday morning, Raytheon CEO Tom Kennedy and UTC CEO Greg Hayes laid out their vision for where the combined Raytheon Technologies Corporation goes from here, the importance of R&D, and why neither the Pentagon nor President Donald Trump should be worried about their new venture.

In your conference call about the merger, you both mentioned how the deal sets you up as “resilient” for the future. Is there anything you see coming down the pipeline that made you think now is the time to create a company with major plays in both commercial and defense?

Kennedy: I would say the resilient part was more of a feature of the deal that came as we brought it together. These are approximate numbers that change year to year, but about 50 percent of the business will be domestic, 50 percent international, 50 percent defense, and 50 percent commercial. So just from the optics, if you step back and you look at that, that essentially makes both companies more resilient relative to their markets. That’s just an inherent feature of the merger of equals. It was not something that we were driving to go make happen, but it was definitely a feature that we wanted to make sure our shareholders understood because it does make us inherently a more resilient company.

Hayes: Look, it’s the scale of the two businesses together will allow us to continue to work best, I think, across cycles. You know, we know that aerospace is cyclical, we know defense spending is cyclical, but technology has to keep moving forward even in the down times, and I think the scale of UTC and Raytheon together as Raytheon Technologies gives us a scale that can make those investments over time and not be as worried about what is happening in the global economy at the moment. This is truly a focus on technology as we bring these two companies together.

Kennedy: There was a couple other features of the deal that kind of played into it but weren’t obviously driving it, but both companies are platform agnostic, and what we mean by that is neither of us essentially develop platforms or sell platforms. Why that’s important is really the amount of capital that you have to go and spend in maintaining and creating these platforms kind of takes your eye off the ball relative to investing in technology moving forward. So that was a big feature, that both companies are platform agnostic.

The other one is we were complementary, not competitive. I talked to Greg, even asked him, Greg, do you remember the last time we competed against each other? We couldn’t remember, and it turns out there’s about, somewhere between a half a percent to one percent of our business where there may be overlap, but it’s a very, very small area. I’ll be frank with you, I never thought of UTC [as competition] because we just don’t compete in the same areas, but we were complementary and one of the areas we’re complementary in is in air traffic control.

So there’s a lot of features to the deal that just come together. The end game was it was really about technology and that was what was really driving us, and the area here and the reason for the timing is that technology is changing very rapidly. To be able to provide the solutions we need for our customers going forward, we need to have the best technology available and the combination creates an ability to generate that technology. We have about $8 billion of R&D that we can leverage, we have 60,000 engineers we can put to work on those technologies to create those next generation solutions for our customers. That was the main driver and then also at the endgame, having a financially healthy conglomerate business that in this case here, our credit rating’s an A credit rating, so a very good balance sheet.

Given that, is it safe to say that the goal is to remain platform agnostic going forward, that we won’t see you competing on platform competitions?

Hayes: Absolutely. Look, Tom and I agree on many things, I would say that is one of the first and foremost things we absolutely agree on is we want to be platform agnostic. United Technologies got out of the helicopter business five years ago because we didn’t like the programmatic risk associated with platforms. We’ll supply all the content and all the systems, all of the offensive, defensive capabilities necessary to make the system successful, but we really think it’s important that we remain agnostic among the platform providers.

In all the materials put out about the merger there is an emphasis on R&D, and in this morning’s conference call, Tom offered a few examples, including how UTC’s materials solutions could impact Raytheon’s hypersonic weapons developments. Is that going to be a major focus going forward?

Kennedy: Raytheon is pursuing hypersonic missiles and the guidance and control for those systems, the payloads for those systems, the seekers for those systems, and then also you have to have propulsion for those systems. It just turns out when you’re flying at Mach 5, you essentially really increase your temperature on all your surfaces and if you have a propulsion system, the air is coming in it’s so hot, at such a high speed, that creates a significant amount of heat, it has to be dissipated in a very efficient way. And one of the areas that the United Technologies has is, really based on the Pratt & Whitney guys, all the technology that they’ve developed over the years in working very high temperatures internal to their turbine engines. So not only do they have, I would call it the heat management capabilities, but also the material science to go implement those. That’s an area that we can leverage in a synergistic way. That was just one example.

Of the R&D areas you’re looking at, are there any you expect to see bear fruit in the near-term?

Second piece is cybersecurity. I think Raytheon is second to none as it relates to cyber, and we view this as a core competency that we can benefit the entire commercial aerospace ecosystem. Not just the connected aircraft, which is probably first order of business, but the whole ecosystem of how do you protect passenger data? How do you protect the equipment that’s on the ground? How do you protect the airplane while it’s flying? All of those are things that Raytheon brings a unique capability to that I think we’ll see that shortly in the marketplace.

And the hope is to spread Raytheon’s cyber background throughout the entire structure? Kind of everything UTC’s got a hand in, kind of sprinkle it through there?

Hayes: Yeah, if you think about it, what’s important from a customer standpoint? We always think about cyber as kind of the moats around our internal processors or our internal email system. What we’re worried about is how do you put cyber protection around aerospace products like jet engines which have digital controllers? We update the software on a regular basis. How do you make sure nobody else puts their erroneous data into our engine, or into our flight control computer, into the avionics system? The whole aircraft, from a cyber security standpoint, has really not been addressed adequately, and it is one of these emerging threats that we think with the Raytheon merger we’re well positioned to address for all of our customers.

Kennedy: I think it’s really about, if you think about it, it’s really the whole play is all about security and safety, both on the commercial side and also on the defense side. So the solutions that we provide essentially will make the world a safer place, whether it’s cyberspace, or whether it’s the physical space.

Obviously a lot of the technology UTC produces in the commercial aviation market is going to end up in one way or another on commercial planes that are sold to China, or at least will be interacting with Chinese systems. Given the concerns about China from the administration, do you see any issues now that UTC and Raytheon will be tied up and likely sharing back-end systems?

Hayes: Look, we have great processes in place to make sure that technology, intellectual property is protected and we’re not going to be exporting anything without the U.S. government’s approval, and I think that goes for both what Raytheon has done historically and UTC. The fact is, we will put advanced technology on commercial airplanes, but all of that commercial technology that’s out there will have a U.S. government license. It’s imperative that whatever we’re putting on a Boeing or Airbus aircraft, it’s not going to jeopardize the defense posture of the U.S. We’re very cognizant of that. We’re not putting missiles on commercial aircraft. We’re talking about GPS and radars, and while there’s crossover benefits, they’re very distinct in terms of the technology architecture.

The Pentagon has said it is starting to look at the deal, and this morning President Trump expressed concern about the agreement. What has your outreach been to the government about this?

Kennedy: Let me take on the DoD first and then I’ll hit President Trump. One thing that this deal does provide is a significant cost savings across the both companies. We have about one billion dollars of gross annual cost synergies that we’ll get out of this deal, and it’ll show up about year four. From year four on, in that way because half our business is defense, about half of that will go back to the customer because we have cost plus contracting it goes back and we have to build it into our rate structure, reduce our rate structure so the U.S. government will get a overall saving that if we weren’t together, they wouldn’t get and that’ll be about $500 million dollars a year, again, starting in year four after the merger. So that’s a big deal for them.

On the President Trump element, though, we have not had a chance to talk to the president yet. He obviously made some comments. We believe that once he understands all the dimensions and the features and we talked about all these features of this merger of equals that I think will be able to have a different perspective.