The real reason why Nammo rolled out a ramjet artillery concept 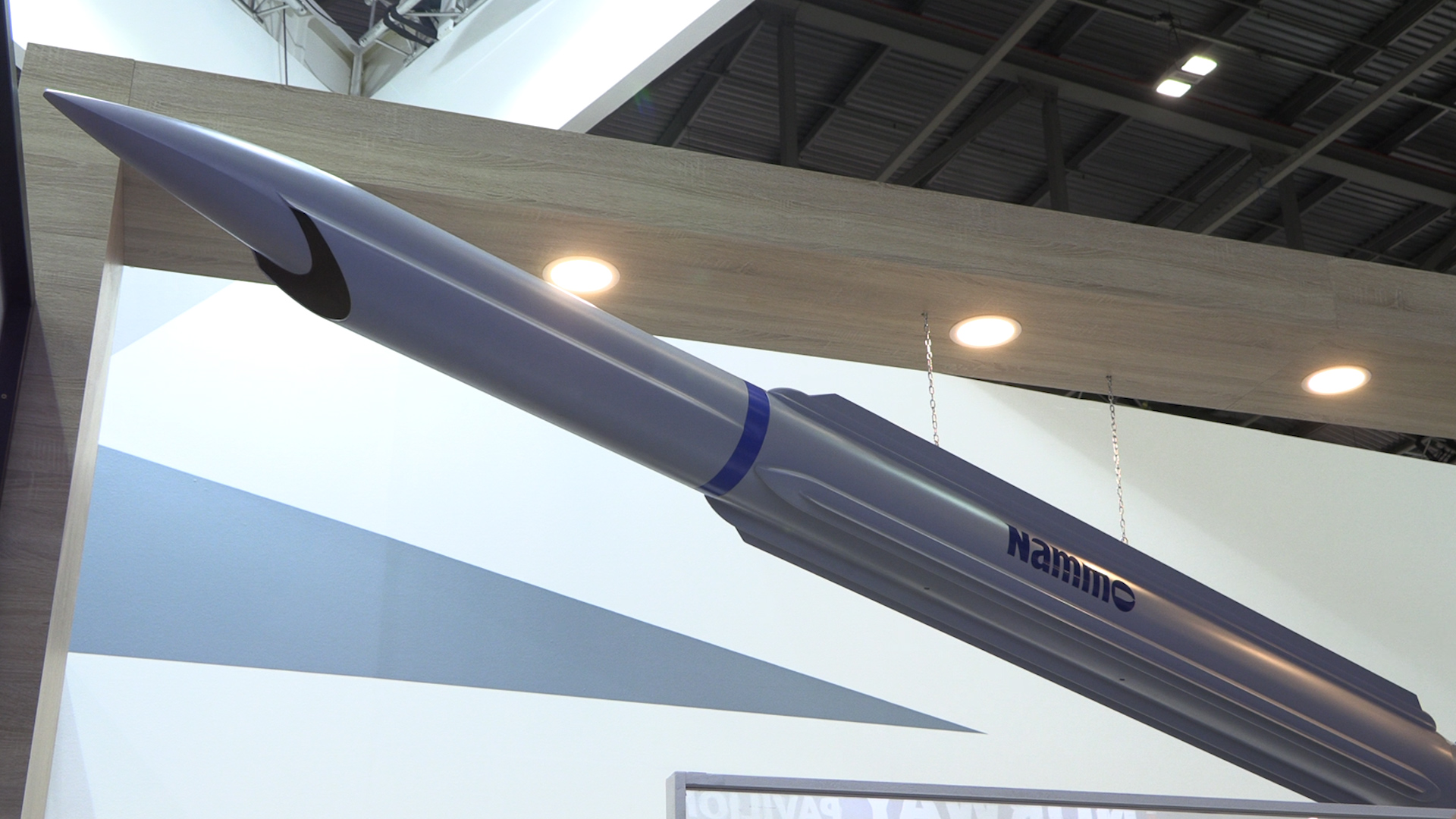 LONDON — A little over a year ago, Norwegian ammunition company Nammo rolled out an “extreme range” artillery concept using ramjet propulsion, but that was just the beginning.

Nammo unveiled at DSEI a new ramjet powered missile engine it is testing. The company’s focus in advancing ramjet artillery all along was to take the fresh experience and apply it to a new engine for high-speed, ultra long-range anti-air missiles.

And it essentially takes a traditional solid rocket motor powered missile and turns it into an air-breather in flight to get after the longer ranges.

The model at Nammo’s booth looks reminiscent of the SeaSparrow missile (ESSM), a Nammo product, but is designed to be scalable for different missions and launcher platforms.

The new ramjet-powered engine missile’s range is expected to reach over 400 kilometers, according to Frank Moller, vice president of strategy and business development in the aerospace propulsion division of Nammo.

The range could be extended with additional booster capability. For perspective, an ESSM’s range is less than 100 kilometers and even its extended range version would only get out to about 150 kilometers.

Nammo believes this fills a gap in the market in terms of range and capability, Moller said.

“You see that within new threats that are coming up, weapons launched from greater distance, and we need to counter that, we need more range,” Moller said.

And to counter capability and deter Russia, range is king, not only in the U.S. where the Army has prioritized Long-Range Precision Fires development above all else, but for European countries as well.

Looking at Russian capability like the S-400M air defense system and its cruise missile development, Europe and its allies like the United States need more range in its missile systems to counter that, for instance, Moller said.

“Same thing goes for artillery because I think every caliber the West has had, the East has had some range that goes a little bit farther, he added.

One of the unique aspects of the missile engine is that the booster is built into the missile itself and during flight transitions from a traditional solid-fueled rocket to an air-breathing system, Moller said.

The design of the propulsion system eliminates the need to carry a large amount of oxygen onboard like a regular solid rocket motor. “As long as these missiles are going to fly in the atmosphere, why not utilize the oxygen that is around them and reduce the weight of the propellant,” Moller said.

“This allows us to have a much smaller missile” because the weight of the oxygen is removed from the equation, he noted.

The missile is designed to be fired and once it reaches Mach 2.5 to 2.8 speeds, the air intake on the system opens up and uses the incoming air to ignite the propellant inside. Some of the air goes directly over the propellant and some goes straight into the after burner, Mollery explained.

When in air-breathing mode, the missile is capable of reaching anywhere from Mach 3.5 to 5.

The ramjet engine is safer for firing in urban terrain because typically boosters fall out of the sky and have to land somewhere. Nammo has integrated the booster motor inside the burn chamber, Moller explained. The propellant burns to reach roughly Mach 3 and then the ramjet takes over. “Nothing falls off in urban areas,” he said.

The engine is also flexible enough to go on a variety of launchers from ground to ship to air platforms.

Nammo believes there is “great interest” in the U.S. military for the technology, according to Moller.

The company has already teamed with Boeing on ramjet artillery development, but there are also applications for the technology for such possible programs like a new interceptor for the U.S. Army’s Integrated Air and Missile Defense (IAMD) system or another longer-range missile.

The front-end of the missile would be tailored to the mission and the idea is it would be able to integrate with a variety of sensors, which is critical for targeting at long ranges. For example, an F-35 Joint Strike Fighter’s sensor could pick up on a target and communicate to the missile to take out the target.

With combinations like that, “then you very quickly fill some of those gaps, closing the range gap. You don’t need a new platform either on the launcher side or the sensor side, you just need the integration,” Lunde noted.

The company plans to conduct a full-up flight test in a couple of years, according to Moller.