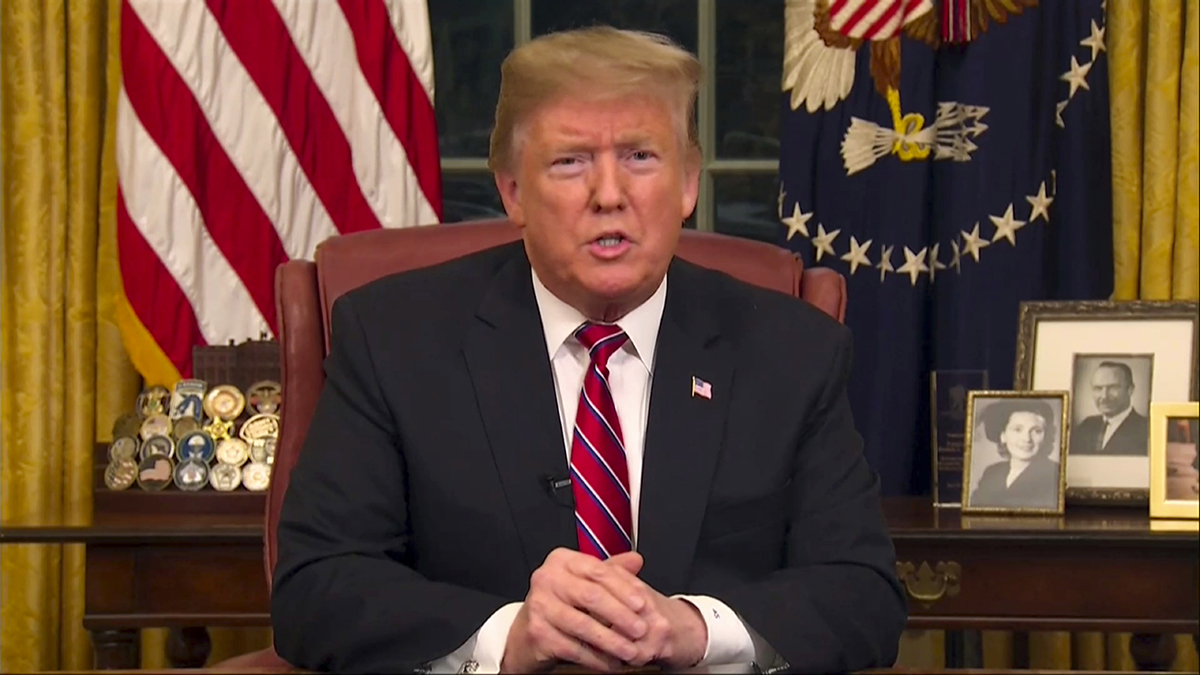 WASHINGTON — President Donald Trump stopped short during Tuesday’s prime-time address of declaring a national emergency that would empower him to construct a southern border wall without congressional approval, instead labeling it a “humanitarian and security crisis.”

While Trump is not precluded from taking the extraordinary step some time in the future, it emerged Tuesday that such action would invite a legal battle from Congress and lead to a politically fraught reshuffling of funding under the existing fiscal 2019 military construction budget.

The possibility came amid a deadlock with congressional Democrats that has led to a partial government shutdown now in its third week. Trump has refused to sign any spending bill to reopen federal agencies that does not include $5.7 billion to begin construction of the wall, his signature campaign promise.

With 800,000 federal workers without paychecks due to the shutdown, Trump said his administration "is doing everything in our power to help those impacted by the situation,” without elaborating. Trump plans to meet with congressional leadership at the White House on Wednesday to continue discussions on reopening the government.

In his televised speech from the Oval Office on Tuesday night, Trump made an emotional and direct pitch to the American people, repeating rhetoric about the U.S.-Mexico border as a conduit for drugs and violent criminals and using emotional language to describe Americans killed by people in the country illegally.

“I’ve met with dozens of families whose loved ones were stolen by illegal immigration. I’ve held the hands of the weeping mothers and embraced the grief-stricken fathers. So sad. So terrible,” he said.

Responding in their own televised remarks, Democratic House Speaker Nancy Pelosi and Senate Minority Leader Chuck Schumer accused Trump of misrepresenting the situation on the border as they urged him to reopen closed government departments and turn loose paychecks for hundreds of thousands of workers.

Schumer said Trump “just used the backdrop of the Oval Office to manufacture a crisis, stoke fear and divert attention from the turmoil in his administration.”

Some reports suggested that just hours before the speech, Trump was undecided about whether to declare a national emergency.

According to two congressional staffers, the Pentagon on Tuesday was exploring the president’s legal authority to declare a national emergency, which would allow him to repurpose unobligated money from existing military construction or family housing projects, for use by the military, among other possible legal avenues.

As that possibility percolated, House Democrats mulled their menu of counter-moves, to include a lawsuit, legislative action to rescind the national emergency or appropriations legislation that would claw the money back from Trump. If either legislation passed the House, it would put pressure on the Senate to follow up, but it seems highly unlikely Trump would sign it into law.

Election to shake up House and Senate armed services committees

Key lawmakers on both sides of the aisle publicly warned against declaring a national emergency to redirect military funding for a wall. Speaking with reporters, the House Armed Services Committee’s top Republican, Rep. Mac Thornberry, blamed Democrats in the impasse over wall funding, but said using military construction dollars for a wall would be “damaging” to the military readiness and quality of life.

“In short, I’m opposed to using defense dollars for non-defense purposes,” said Thornberry, of Texas. He added that while border security is important, it’s the Department of Homeland Security’s job, not the Pentagon’s.

By Thornberry’s reckoning, Trump-era defense budgets have yet to make up for Obama-era neglect of the military construction budget. “Seems to me we ought to fund border security needs on their own and not be taking it from other accounts,” he said.

After Trump on Monday took a quote from HASC chairman Adam Smith, D-Wash., out of context to suggest Smith was on his side, Smith made the rounds on TV to correct the record. He told CNN that Trump declaring a national emergency would be “a huge mistake” and invite a court challenge, “because there clearly is no emergency.”

“This would undermine the readiness of our national security,” Smith told MSNBC of the hypothetical plan. “It would take money away from building the facilities that our troops need to train, be equipped and prepare for the missions we want to send them on.”

“Declaring a trumped up national emergency in order to skirt Congressional approval is wrong,” Reed said in a statement. “And our troops and taxpayers should not bear the burden of a broken, preposterous campaign promise.”

Reed is among Democrats who have pushed back on the Trump administration’s efforts to use $450 million to enhance existing border fencing and construct new border fencing along 31 miles of the Barry M. Goldwater Range in Arizona, calling the project wasteful.

With more obvious needs at hurricane-damaged Camp Lejeune in North Carolina and Tyndall Air Force Base in Florida, it might be difficult for the White House to make the case, even to other Republican lawmakers, for raiding the military construction budget.

“It’s a zero sum game,” said one congressional staffer. “Imagine any other president redirecting military funding for a non-military use.”

Defense budget expert Todd Harrison, of the Center for Strategic and International Studies, said flatly, “This would be bad for defense."

“You would be taking away money planned and appropriated for specific military construction projects with with no plan to restore the money in the future,” Harrison said. “You’ve got military facilities, schools and barracks that you were going to build or repair, and now you’re taking about taking $5 billion away from that.”

Jessie Bur and The Associated Press contributed to this report.