Why the British army tested robots in muddy fields 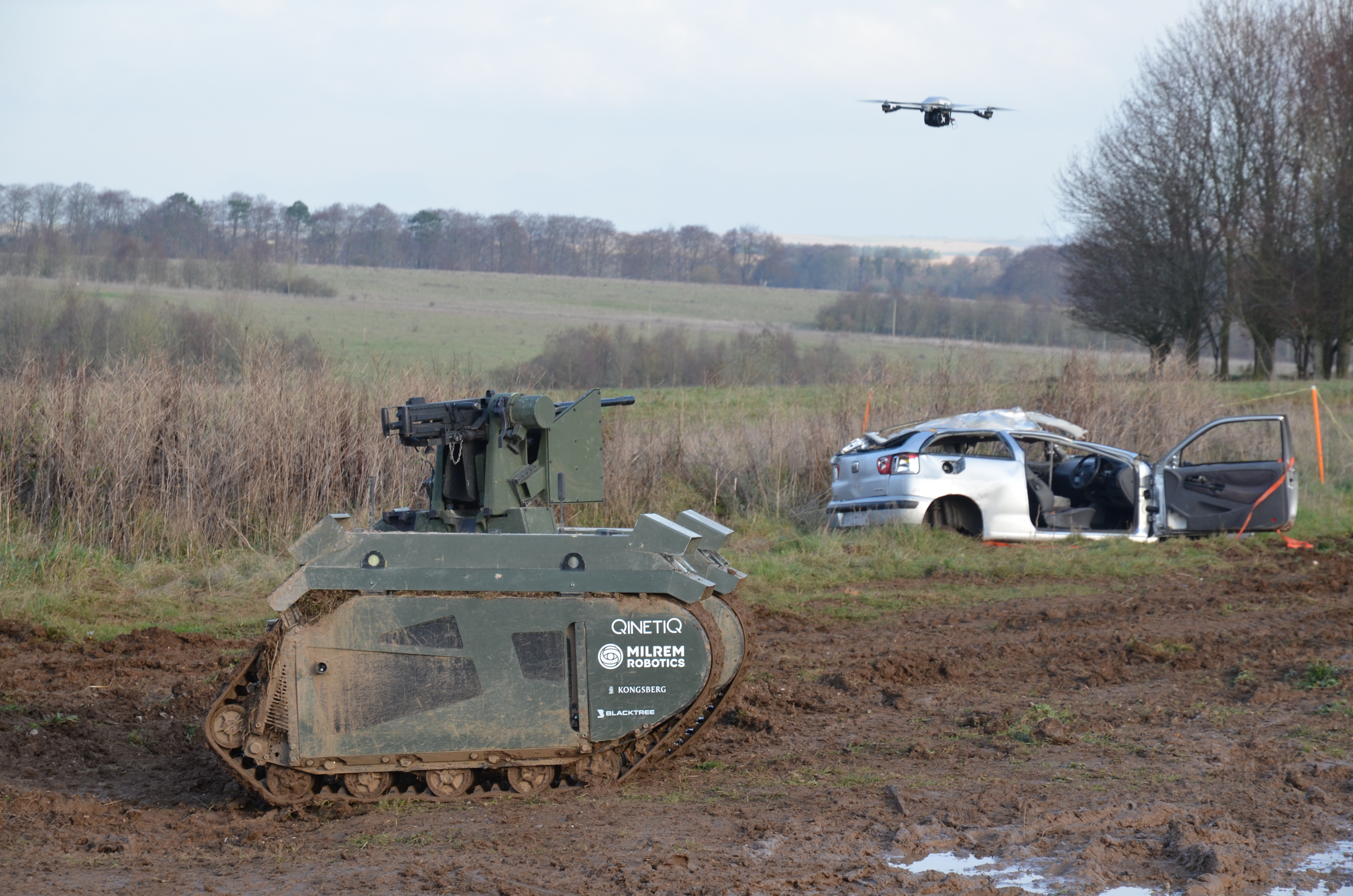 Senior British army officers have signaled their intent to accelerate the fielding of several unmanned — and increasingly autonomous systems — following successful army trials at the end of 2018, but much like other forces around the world the United Kingdom faces challenges from how to modify archaic acquisition processes, to overcoming technical issues.

In December, the British army concluded its landmark experimentation exercise known as Autonomous Warrior, in which the service evaluated more than 50 unmanned systems from industry over a month-long period in the south of England.

The exercise, which put the robotic systems through grueling trials in muddy fields and a purpose-built facility for urban fighting, was the first attempt by the British army, as well as industry, to determine how the technology will work in a combat environment. Much like other forces around the world, the service hopes to use robots to carry out the dangerous, and often tedious, elements of combat.

Over 200 troops — made up of infantry, marines, engineers, airmen as well as U.S. Army personnel — were equipped with a variety of robotic and autonomous systems with the aim of improving areas such as combat mass, soldier lethality and overall information gathering.

For example, in one scenario, soldiers used robotic engineering vehicles to clear an obstacle, while a small quadcopter flew overhead to provide infrared imagery before armored infantry rolled in to take an enemy position. Robotic systems with varying levels of autonomy were a key part of the exercise, ranging from radar-equipped drones for detecting buried IEDs, to small two-wheeled robots that are thrown into buildings to search for enemy fighters.

The head of the British army, Gen. Mark Carleton-Smith, has directed the Ministry of Defence (MoD) to speed up the fielding of technology used during the exercise. “His direction to me is very clear,” said Maj. Gen. Chris Tickell, director of capability for the British army. “He wants to see some of this kit in the hands of the field army in 12 to 18 months.

“Success or failure will absolutely hinge on what happens after the experiment,” he added. “And that is about the exploitation and proving to industry that we are as good as our word and we are going to take some of these ideas and put them into the hands of the user.”

For Tickell, an equipment budget of £22 billion ($28 billion) over the next decade will allow the MoD to purchase new unmanned technologies, but the “trick is to turn the ideas that you see here into tangible capability.”

This may require the MoD “to adjust and even devise new acquisition processes to enable rapid acquisition”, said Trevor Taylor, an expert in defense acquisition at the Royal United Services Institute, a London-based think tank. “How will requirements, business cases, competitive tendering or ‘partnering,’ testing and safety cases be addressed?”

A related challenge continues to be the British army’s lack of experience using unmanned and autonomous systems, with commanders using the Autonomous Warrior exercise to better understand capability enhancements as well as the inevitable shortfalls.

The officer responsible for coordinating the exercise, Lt Col Nick Serle, told C4ISRNET that while the British army has worked with industry on new technologies it had not previously focused on robots and autonomous systems. “That’s why this year we decided to spend a month on Salisbury Plain just focusing on robotics and autonomous systems,” Serle said. He also commands the British army’s experimentation unit, known as the Infantry Trials and Development Unit.

“This is a real opportunity to bring stuff into the field and really see if it does what industry thinks it’s going to do, but also to see if military users will use it the way [industry] thinks they will use it,” Serle said. “There’s no one single piece of kit that will solve all our problems, it’s a combination of something in the air such as a surveillance asset, something on the ground, perhaps with a weapon on it or just doing logistics, but then it all links through an information system where you can pass that data and make better decisions to generate tempo.”

An issue highlighted by Serle was an increasingly crowded radiofrequency spectrum, especially as several unmanned systems jostle for space to beam back high-resolution data from onboard sensors. “The problem is when they start cutting each other out, we are dealing with physics here, if we want to have great high definition video passing across the battlefield we need to trade somewhere else.”

Taylor noted that not only will there be a need to ensure that the control systems do not interfere with each other, but also that army leaders “will have to be convinced that new systems are not simply too vulnerable to jamming and other disruptive techniques by an adversary.”

A promising development from the exercise is the ability to optionally man a standard vehicle using applique kits that can be fitted within a few hours. Several examples were on display when we visited the exercise in December, including a remote-controlled Warrior infantry fighting vehicle and a lightweight MRZR tactical vehicle.

As part of the experimentation, troops used the vehicles in unintended ways. One U.S. Army soldier noting that the MRZR had been a helpful surveillance tool because of its onboard camera. Squads were also keen to use the UGVs to help in entering buildings and also as modern-day pack horses to carry supplies or people.

“What we have found is that when troops are using these [UGVs], naturally they just want to jump on the vehicle because it goes faster than they can, and you can move groups very quickly on them,” Serle said. He added that for safety reasons the soldiers were not allowed to hop on board during the exercise. “Optionally manned is good, but whether it needs to be optionally manned with a steering wheel and a seat I don’t know, I think you could do it more like a Segway. But there’s no doubt people want to get on them.”